The importance of the precharge

The importance of the precharge

In systems using expansion tanks, it is utterly important that the tank has the same pressure than the system in static mode so it does not impact the capacity of the expansion tank.

If the tank pressure is higher than the system :
The air contained between the bladder and the shell will use more space than it should,  compressing the bladder, thus considerably reducing access to the heat transfer fluid. 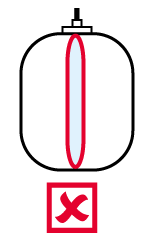 When the system switches in dynamic mode at the start-up, as the boiler is on and the pump circulates the liquid, the expansion of the heat transfer fluid will not be able to discharge in the tank, except if the system pressure becomes higher than the tank’s. This situation is undesirable, yet dangerous, as the tank will not have the ability to absorb the fluid’s expansion when the system has an important demand in heating, bringing the pressure up in the system and potentially opening the safety valve if the set pressure is reached (which is normally 30 PSI in residential systems).

If the tank pressure is lower than the system :
The opposite will happen.  Air will still compress the bladder, but with a pressure that is too low, allowing too much liquid to enter the tank. 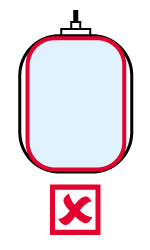 When the system is in static mode, as there will be a lower pressure in the expansion tank, the heat transfer fluid will be pushed in the bladder as soon as it will be installed, using a certain percentage of the tanks capacity even before the system has started. When the system will face a high demand, the efficiency of the tank will be highly mortgaged as a certain volume of the tank will be already used, not leaving enough space available for the thermal expansion. In addition, this will have stretched the bladder, potentially affecting its efficiency and lifespan.

How to adjust the tank pressure ?
First of all, you need to know the system’s pressure. Generally speaking, Calefactio adjusts all its residential heating equipments at 12 PSI, could it be GMP or tanks. It’s a value that suits hydronic systems with a highest point of 20 ft (6 m). When a heating or potable service kit is installed, it is possible to check the system pressure in both static and dynamic mode with the gage installed on the service center. If you need to check the pre-charge of the tank, the tank must be isolated from the system and drained.  You only need to close the valve to isolate the tank, drain it, and read its pressure with a gage using the Schrader filling valve, namely a typical tire valve. This value must be the same as the pressure reducing valve of the system (the valve on the GMP). 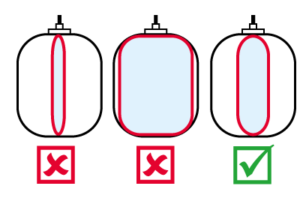 At Calefatio, we firmly believe in continuous improvement. We apply it in our products development, our relations, and each team member is encouraged to practice it in their field of expertise. Today, we are proud to show you a part of what it means concretely for us by presenting small ameliorations that we rencently made […]

COVID-19 : update on our operations

Last week, we notified you that we would adjust our operations following the Quebec Government order to close of all non-essential stores and services starting at midnight tonight up until April 13. Despite this measure, we adjusted our operations to remain available for our clients through email as teleworking and online trade are authorized. We invite you […]

COVID-19 Pandemic : The security of our community above all

The growing COVID-19 pandemic in Canada is forcing our governments to put in place unprecedent measures to ensure citizen’s health. Quebec Government ordered the closure of all non-essential stores and services starting at midnight, March 24 up until April 13. Despite this measure, we adjusted our operations to remain available for our clients through email as […]